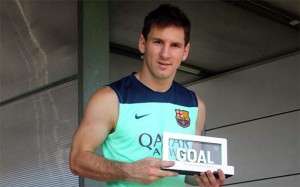 Lionel Messi won the Goal 50’s price. This is the reward of a special campaign during which the player has beaten the old record of Gerd Muller, who scored 85 goals in a calendar year. Barcelona striker beat Franck Ribery who has signed a historic triple with Bayern Munich (Championship, Cup, and Champions League) and Cristiano Ronaldo, who won the award in 2008 and 2012.

“I am very excited. As players, we work all year for collective trophies and not looking for individual awards. But when they arrive, it is encouraging and it gives us strength to continue on the same path, “said the Argentine striker to goal.com.