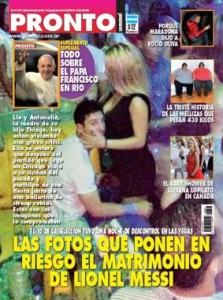 In early July, we told you about the crazy holiday of Lionel Messi alongside Ronaldo in a hotel in Las Vegas. The charming company of the two super stars has not gone unnoticed. This could create many worries to the Argentinean.

The Argentinean magazine Pronto unveiled Tuesday a picture of Messi’s head between the breasts of an unknown at this famous festival. One thing is certain; it is not the lovely Antonella Roccuzzo, the wife of the Barcelonan and the mother of his little Thiago. The South American publication also reveals that this image is the cause of current crisis between Messi and his wife. We were also surprised to see Cesc Fabregas in company of Antonella during her holidays.