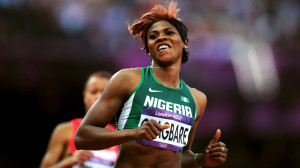 Real current sprint sensation, Blessing Okagbare will be one of the attractions of the next world championships in Moscow (Russia). Her agent Paul Doyle is dithyrambic. “I think Blessing is the greatest athlete that this sport ever had since last year,” he says on Brila FM. “I think she is able to be the female Usain Bolt “, Doyle added.
The Nigerian already weighted the capacity of her major competitors in previous meetings. In the 100 m as well as in the 200m, the Jamaican Fraser Campbell-Brown or American Jeter has been defeated. Doyle, who is also responsible of major stars such as Asafa Powell says that Okagbaré can reach new levels. “She is naturally talented and very young. In a few years, she will dominate the sport “, he assures.

If the Nigerian athlete attracts so such the projectors, it is not accidental. Okagbare is the record holder in the 100m in Africa. Performance that she has also improved twice last weekend in London at the meeting of the Diamond league, the first time in series (10.86secs) and then in the finish with a time of 10.79secs.