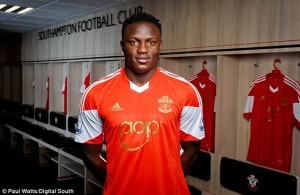 Victor Wanyama will wear the number 12 for his club this season in the Premier League. The Kenyan midfielder that has signed this summer with Southampton is the first player in East Africa to evolve in the prestigious English Premier League.

For a transfer of 12 million Euros from Celtic in Scotland, he is also the most expensive transaction ever made by the Saints. It will be one of the attractions of the new season. Voted “Best Young Player” in the Scottish championship last season, Wanyama is a safe bet for the Harambee Stars of Kenya and the continent.

His coach Adel Amrouche who does not stop praising his man, confided to us exclusively a few days ago: “Victor is a very gentle boy. He works hard. There is no doubt that he will succeed in England. In selection, I have not hesitated to entrust him the captaincy because of his natural leadership. He is a great player and future best player in Africa “.