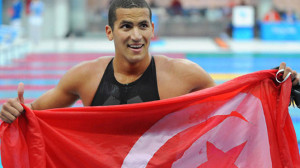 Oussama Mellouli is not on the podium in the 800m at the Swimming World Champs in Barcelona.

Oussama Mellouli can bring himself comfort with two medals won at this World Champs in the 10km and 5km freestyle swimming.