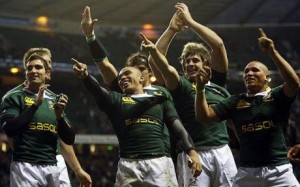 The Springbok coach, Heyneke Meyer, has released his list of players selected for the Four Nations. It is a group of thirty players that the South African coach called for the two games of the championship. About ten internationals operating outside of South Africa are on the list. An unusual fact in the Boks.

Two players from the Irish Championship are also in the Group: scrum half (flyhalf) Ruan Pienaar of Ulster, Leinster’s back, Zane Kirchner.

The English league is represented by the third line of Bath, Francois Louw.

There is also a return to selection of Fourie du Preez of Suntory Sungoliath (double champion in Japan).

the Scrumhalf of 31 years had not been summoned to the Boks since the quarter-finals of the 2011 World Cup (lost against Australia, 9-11).

South Africa began the competition against the Pumas of Argentina, in Soweto on August 17. The All Blacks are the defending champions of this Four Nations.