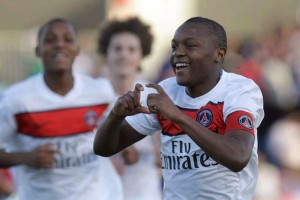 Author of the equalizer for Paris Saint Germain PSG, winner (2-1) against Bordeaux for the Champions Trophy last Saturday in Libreville, Gabon, the young Hervin Ongenda will be in the shadow of the bloated and rich workforce of the club. The father of the nugget, Felix Ongenda who wants stability, believes in an opportunity for his child.

“He will be lucky in PSG; it is for him to succeed in getting a place in the squad. He takes this as a learning year. There will always be times when the coach will need him, “he thought”. And then, working alongside players like Ibrahimovic and Cavani, you can learn very quickly. He is there to progress, he does not need to cut corners, “said Ongenda the father in the columns of Parisien.