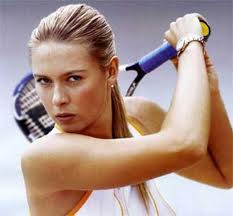 The famous magazine Forbes announced Tuesday the list of the richest female athletes in the world. We have 7 tennis players in the Top 10. It is the Russian Maria Sharapova who dominates the ranking with 29 million dollars in revenue. She beat the world number one, the American Serena Williams, who has 20.5 million dollars (8.5 million in prize money, 12M in sponsors). The Chinese Li Na with 18.2 million dollars closes the list.
The first non-tennis player is ranked in 5th place and is called Danica Patrick. The Nascar driver is ticked off at 15M dollars. She is followed by the skater Kim Yu-Na. The golfer Paula Creamer (10th with 5.5 million dollars) ended the list.