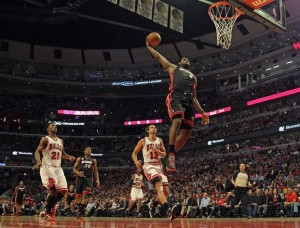 The new NBA season begins in October. The champion, Miami Heat, puts into play its title on 29 October. LeBron James and Co will face for the first day the Chicago Bulls. There will be a fragrance play-off at the American Airlines Arena. There could see an official return into the competition of Derrick Rose.

In the West, Doc Rivers will have to start on the bench of the Clippers with a derby at the Staples Center against the Lakers. Curiosity will be to see if Kobe Bryant will be on the tartan to begin the battle of pacific division.Tony Parker and the Spurs of San Antonio, NBA vice-champion will compete on October 30 against Memphis.

Here are the posters of October