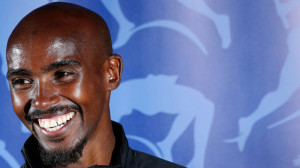 The World Athletics Championships open its doors this Saturday in Moscow. Mo Farah is a favorite of 5000 and 1000 m. The British athlete is a hope of medal winning for Great Britain on both distances. Of Somali origin, Farah had improved the European record in the 1,500 m, finishing second in the race during the meeting in Monaco in July. The double Olympic champion will be awaited by Kenyans and Ethiopians often masters of the long-distance race.
In an interview with L’Equipe, the new European record holder of 1 500m recedes its preparation.
“It’s hard, but I love the pain of training.” “To train differently, intelligently, with the help of machines that relieve stress (…) You do your normal mileage, but without injuries.”
“Most of the time I’m in the mountains, in training camp (…) The most advanced scientific research are useless without the seriousness and willingness to be dedicated to one’s work (…) Athletics this is  simply life. “” When you consider the number of people running and very few who gets to the top of the Games you can see that there are people who find a higher power. “