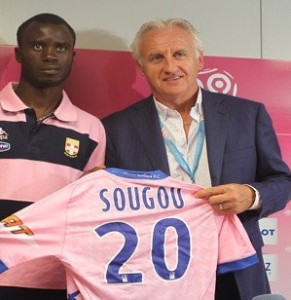 Modou Sougou was on loan from Olympique de Marseille to Evian Thonon Gaillard. The Senegalese arrived in Haute-Savoie with one idea in mind: to get playing time to show what he can do, and get back with strength to the Phoenician club. Being a substitute last season, the former striker of Cluj wants to play regularly for a strong comeback

In an interview with the website Mediafootmarseille, the Senegalese international returned to the conditions of his departure. “I spoke with Jose Anigo. To my sake, I had to leave. He wanted me to stay in France to watch me every weekend. He sought where I could play 90 minutes every game. He was the one who has chosen the destination. “
“We must be realistic. The president told me he could sell me because he has offers. But he count on me. He does not doubt my qualities. But in OM, places are expensive. I could have stayed playing ten or fifteen minutes as in the past six months. But this is not how I see football. “