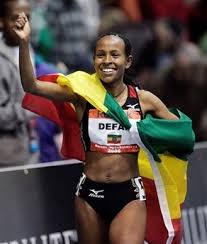 Meseret Defar qualified for the final of women’s 5,000 m. The Ethiopian set the fastest time of the series by signing a time of 15.22.94. Double Olympic champion in the distance (2004/2012), also gold medalist at the 2007 World in Osaka (Japan) remains the favorite of the race.
For her part, Almensh Belete will not take part in the final of women’s 5,000 m of the 14th IAAF World Athletics Championships in Moscow. The Belgian of Ethiopian origin failed to qualify after the playoffs that took place Wednesday morning. Belete finished sixth in the first two series in 16:03.03, far from his Belgian record (15:10.24) set last year at the Olympic Games in London.

The Ethiopian, who ran over a minute off his personal best, unfortunately, has not managed to stay in the group of these athletes and therefore was sent back to draft. Unfortunately for the athlete we ran much faster in this series. The five qualified to time are also found in the second race.