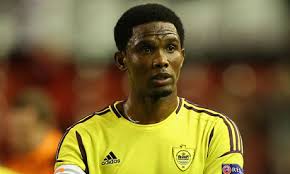 Sixth global Income of football, Samuel Eto’o (the highest paid footballer apart from sponsors) must find another home port. In financial difficulty Anzhi Makhachkala want to part with its big salaries. The Cameroonian international is thus on the market and many clubs would like to enroll him.

Announced in the MLS, the former FC Barcelona player would, according to a source close also in the viewfinder of Manchester United. In an interview, the Cameroonian striker had appealed to his former coach at Inter, Jose Mourinho back on the bench of Chelsea. “I’m always happy when someone who has worked with me is happy to be back and work with me again”, Mourinho said. I am pleased when I read that Samuel is tempted. It’s fantastic for us, but we’ll see what happens, “reported le10sport.

Apparently Happy One always prioritizes the recruitment of Wayne Rooney and would not rush for the file of the Indomitable Lion. What will the player of the Red Devils decide?