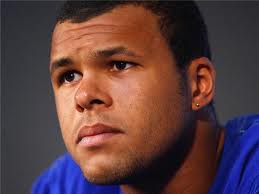 Jo-Wilfried Tsongo will not play the last Grand Slam of the season. The Franco-Congolese injured in the patellar tendon during Wimbledon has withdrawn from the US Open in an interview with L’Equipe «I’m not going (to the U.S. Open). Today I have to take care of myself and make sure I can play at hundred percent, “said the world No. 8, who had to waive the Montreal Masters 1000 for the same reason.

“The thinking is simple. The doctors told me that I had at least two months for my tendon to be partially healed, and five months to be completely healed. Two months, it is exactly when the US. Open will start, “he said. Tsonga, who has not appeared in competition since his abandonment on the London grass, hopes to be fit for the tournament in Metz “My knee will dictate the tone. I do not know. I scheduled my return to Metz (from 16 to 22 September). I still have one month, it will come very soon, but I’m optimistic, “he says.

If Tsonga takes time for the tournament in Metz, the French courts will have to find a new effigy on the women’s tour (WTA). Marion Bartoli, the seventh player in the world, recent winner of Wimbledon, has indeed put an end to her career.