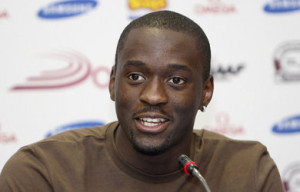 Teddy Tamgho got on the track this Friday with the qualifications of the triple jump at the World Athletics Championships in Moscow. The Franco-Cameroonian in these World championships is the third performer of the season. The triple jumper returns to a major international competition during the World Championships in Moscow, two years after his last in the European Indoor Championships in 2011. In a press conference, the Cameroonian does not hide his happiness to return to the top level.
“I take things as they come, step by step. It’s been two years that I’m out of the big leagues and it will be a great moment for me. I am rediscovering the highest level. I’ll go over the warm-up track just now and Thursday I’ll watch the final of the women’s triple jump. I love athletics, even being a spectator, I’m a fan, I make my own statistics, it will be a big moment. “
“For a medal in hand, let’s say we are five to be held in less than ten inches gap, and then everything can happen. Some will be above their level, some below and others at their level. I like the outsider because I am more focused on myself. When you’re favorite, you come with some confidence. Being favorite gives more confidence while being outsider gives more vigilance. And me, I need more vigilance than confidence. “
“I really need to take good care of the qualifications. I have not done the qualifications since Bercy (European Indoor Championships 2011). I will find the operation of the Appeals Chamber; it’s been two and a half year that I have not experienced this. The wait is longer than meeting, it goes in the morning … Even if we say that the world belongs to those who get up early, and this phrase was not made for me. I will have to be smart without biting any jump. I saw the case of Brittney Reese (the ladies length) passing in the final for the benefit of a better second test against her compatriot. And then the following day a boom! (She was scared the third consecutive world champion, Ed.) “