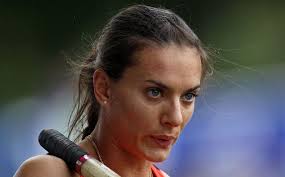 France 24 published an article yesterday on the position of the Russian champion Isinbayeva on homosexuality. While many voices have been raised to condemn the recent homophobic law adopted by the Russian Parliament on June 11, the athlete said she supported the new law:

“If you allow militating and doing all these things in the street, this is worrying for our country, because we see ourselves as normal people. Men live with women, and women with men. This comes from our history. We never had this kind of problems in Russia and we do not want them in the future, “she declared.

Faced with the outcry over his inappropriate output, she quickly hurried back to her remarks by stating that she was opposed to every “discrimination” against gays.

Without going into the polemic, our champions should be aware that they have a role of model to play with many young people and this requires a certain tolerance. At a time when Africa is in search of development and where homosexuality is punishable by death in many countries, here are some comments of African Internet users on social media that will allow the perch star to best think about her talking in the future:

– “We must strongly condemn this despicable” witchcraft “and this animal bestiality of the destroyers of the world.”

– “If I could, I would burn all gays at the stake and the evil would be banished, thus said the Lord.”

– “Homosexuality is a disease.”

– “A question: If a man and a woman had not given each gamete (spermatozoid and ovule) how can these homosexuals come into the world? Stop supporting this kind of vice. “