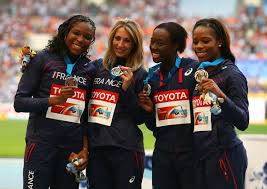 While they were jubilant after finishing second in the women’s 4x100m relay final, the girls of the team of France will laugh least an hour later. Stella Akakpo and her friends had to be disqualified after a claim accepted by Britain. At issue the passage of a litigious witness among the Tricolor.

The second passage of the stick between Ayodele Ikuesan and Myriam Soumare was out area. So the nice straight line of the Franco-Togolese Akakpo will be ultimately for nothing. Previously, Jamaica flew over the race in 41 sec 29, ahead of the United States (who was 3rd before the disqualification of France). Britain got the bronze medal.