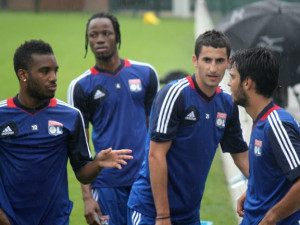 Lyon receives tonight at Gerland Real Sociedad on behalf of the first phase of dams of Uefa Champions League. To this end, Remi Garde has selected 18 players.

Defector from Montpellier Henri Bedimo quickly found his way into the Rhone defense. The Cameroonian left side tenured during two games in Ligue 1, should make his debut with the European jersey of OL tonight. On the bench in the win against Sochaux, Bakary Kone from Burkina Faso is in the Group of 18 players as well as the Franco-Cameroonian Samuel Umtiti.

The Guadeloupean Lacazette at ease since he was repositioned at the center forward should depute the meeting with his friend of the attack, the Franco-Algerian Yassine Benzia.