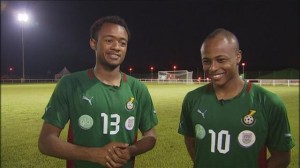 The Ayew brothers have finally written to the Ghana FA after a six months temporal  break. The Ayews received criticism from all angles after writting to the Ghana FA to take a break. Dede and his brother Jordan Ayew took a break from the black Stars after the duo were left out
of the 2013 AFCON.
The duo met the president of Ghana and agreed to return to the Black Stars but the Ghana FA asked for official notice before they will be accepted to serve their nation Finally, the duo have written to the Ghana FA, which means they are now available to earn a call-up to play for the Black Stars.
Ghana now gets fully prepared to face Zambia with four of the top players returning to the team. Kevin Boateng, Sulley Muntari, Dede Ayew and Jordan Ayew are now ready for battle now. Ghana Black Stars will play their final 2014 World cup qualify against Zambia on 6th september 2013
and the duo might be called by coach Akwasi Appiah.