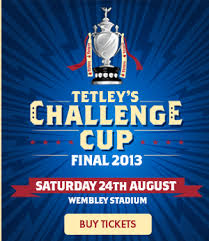 The final of rugby league’s most prestigious cup competition takes place on Saturday when Hull FC take onWigan Warriors (15:00 BST) at Wembley.
Wigan are bidding for their 19th win in this competition, eight of those victories coming in consecutive years between 1988 and 1995. Amazingly, Wigan  have only taken part in two of the last 10 finals, winning one (2011) and losing one (2004). England international Matty Smith is in his first full season with the Warriors, and you can read the scrum-half’s profile on his team-mates on the BBC Sport website.
Coverage of the final begins at 14:15 BST on BBC One HD, with live commentary available on Radio 5 live,, BBC Radio Manchester and BBC Radio Humberside.