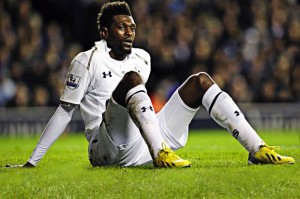 There are misunderstandings between Emmanuel Adebayor and Tottenham. The Togolese striker undesirable among the Spurs has been made available to the reserve team by Andre Villas-Boas. Absent during the first day of the season Sunday against Crystal Palace, the former Monaco does not appear either in the group that faces this Thursday Dinamo Tbilisi (Georgia) in the Europa league.

It is clear that Adebayor is not part of the plans of Villas-Boas this season. The Portuguese coach has already been shopping to compensate for the departure of the Togolese. Roberto Soldado has been purchased and the club is still having in its viewfinder the striker Erik Lamela of AS Roma while Willian of Anzhi Makhachkala is currently in London to undergo a medical examination.

Besiktas does not abandon!

Proposed to Real Madrid this summer, Adebayor is still in London but do not train with the professional team of the Spurs. This situation strongly resembles that of Bafetimbi Gomis in Lyon. The reason of the contention between the former Gunner and his leaders of Tottenham is none other than his salary. For a player who should not appear this season, his salary of nearly 800,000 Euros per week is no more available for the Spurs.