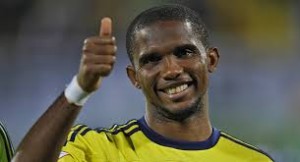 The Cameroonian striker who has become too expensive for his Russian club Anzhi Makhachkala has reached an agreement with Chelsea and that the case should be formalized this Monday. According to le Telegraph, which revealed the information, the transfer amount is estimated at € 2.5 million. The player’s agent however conditioned the departure of Eto’o to a salary of at least 350,000 Euros per week.

For his part, the Belgian international of Chelsea, Romelu Lukaku is not afraid of losing his place with the arrival of the striker of 32 years. “Every player wants to be in the best team. If a player can contribute to the improvement of the team, why not? Samuel Eto’o, Wayne Rooney, I heard about a lot of people. I’m not scared, “he said in an interview with Sky Sports.