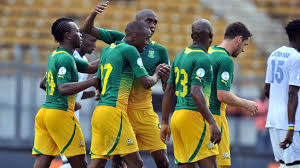 Gordon Igesund, the coach of the Bafana Bafana unveiled this Tuesday the list of the players invited to play the game on the final day of 2014 World Cup qualifiers. South Africa will face Botswana on September 7. A win will allow the teammates of Ithumeleng Khune a glimpse of the playoffs.

In this list, there is a return to selection of Bongani Khmalo and the recall of Anele Ngconcga. Convened on August 14, he had been deprived of the selection by his club and sanctioned by the South African federation.

South Africa is second in its group after benefiting from docking of points of Ethiopia, leader. The other match of the group will therefore oppose the Walya Antelopes to Central Africa.