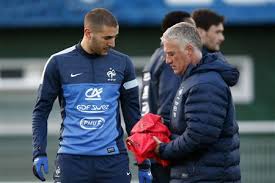 That was the real interrogation of the list of Didier Deschamps. It is now official. Andre-Pierre Gignac has been recalled by the France team coach. Marseille striker author of three goals in three games this season is among the 25 players called to face Georgia and Belarus in 2014 World Cup qualifying.

Gignac had not appeared in France Team since the 2010 World Cup and the scandal of Knysna. No Yohan Cabaye pending for transfer to Newcastle and Yoann Gourcuff not really physically fit according toDeschamps.