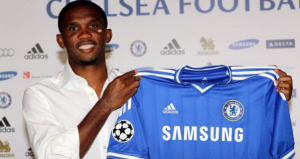 It is now official what you learned a few minutes ago. Samuel Eto’o signed his one-year contract with Chelsea. The English club has formalized the recruitment of the Cameroonian striker on its website. Eto’o arrives from Anzhi Makhachkala, where he spent the last three years.

“I am very happy to be here, but also nervous as I hope to play as soon as possible. It was an easy decision to make. I saw the quality of the group of Chelsea, and I was happy under the orders of Mourinho in the past. So when the opportunity presented itself, I was delighted to grasp it,” he entrusted for his first words on the official website of the Blues.

Eto’o will be paid up to € 8 million per year. This contrasts dramatically with his 20 million salaries in Russia that made of him the highest paid player in the world. The captain of the Indomitable Lions of Cameroon regains the Champions League in particular and his former coach, Jose Mourinho at Inter Milan, the last club he played and won the most prestigious European competitions.