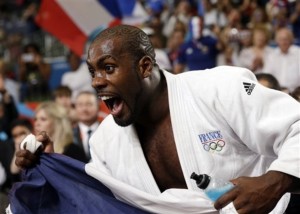 Teddy Riner (24 years 2.03m) won his sixth world charm where it all began. The Guadeloupean on Saturday flew his over 100 categories in the World Championship of in Judo Rio de Janeiro.

Pitted in the final to the Brazilian Rafael Silva, the French has dominated as in the previous rounds by ippon on capital, winning his sixth world heavyweight championship, world record. “It is true that this medal is mine but I dedicate it to the medical staff, my family, my club and my partners, who followed me and supported me. Because this year, I drooled! Ultimately, I had good feelings, I was in my judo, “said Riner, whose preparation has been marred by physical problems.

The now six times world champion won his first world title in 2007, already in Rio. And he has more established his dominance in the category “Hopefully days like this there will be many others”. After his first Olympic title in London 2012,