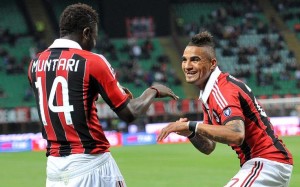 Sulley Muntari today in an interview says he will miss his brother Kevin Prince Boateng. Kevin Boateng completed a shocking move to German side Schalke 04 on friaday and made his debut appearance on sunday after helping his team win 2-0 against Leverkusen.
Muntari and Boateng are good friends following the wonderful time they shared since the latter moved to the Serie A giants. “He called me a night before his leaving and told me he might leave AC Milan, yea, thats how life is. I had nothing to say but to wish him well.“I hope he’ll be happy and play as he can. I’ll miss him ” says Sulley Muntari. With Kevin out of AC Milan, who will Sulley now dance azonto with on the field.
Kevin will arive in Ghana today to prepare for the 2014 World cup game against Zambia. The two players might meet again in the Black Stars camp as they are both available to play for their country again.