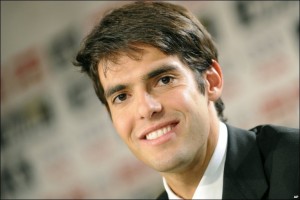 Brazilian attacking footballer Ricardo Kaka has finally return to his former team AC Milan. Kaka joined Milan  for a fee of €8.5 million in 2003 where he won FIFA World player of the year award in 2007. Kaká added the Champions League title to his trophy case for the first time when Milan defeated Liverpool on 23 May 2007.
Shevchenko’s departure to Chelsea  for the 2006-07 season allowed Kaká to become the focal point of Milan’s offense as he alternated between the midfield and striker positions. He finished as the top scorer in the 2006-07 champions league campaign with ten goals. One of them helped the Rossoneri eliminate Celtic in the quarter-finals on a 1–0 aggregate, and three others proved fatal for English giant Manchester United  in the semi-finals, despite Milan losing the first leg.
In 2009, Kaka signed for Spanish club Real Madrid for a transfer fee of €65 million.He was very instrumental in Real Madrid as he scored more important gaols and made crazy assists for his club. On 4 December 2012, after scoring in a 4–1 win against Ajax, he became the top Brazilian goalscorer in Champions League history with 28 goals.

For sometime now the Brazilian is has been struggling to be in the first eleven for Madrid and it is now confirm that he has return to AC Milan.