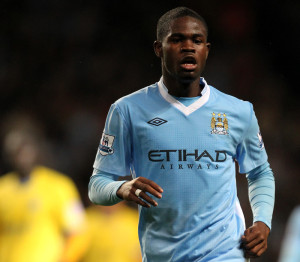 Ivorian midfielder Abdul Razak has join Russian side Anzhi Makhachkala on a loan deal for the rest of the season from Manchester City. Having left Crystal Palace’s youth set-up in 2008, Razak joined the Manchester City Elite Development Squad  in July 2010.
On 28 October 2011, Razak was loaned to English club Portsmouth  on a one-month deal. He made his debut for Portsmouth against Derby County the next day, coming on as a 62nd minute substitute in a game Portsmouth lost 3–1. After one month withPompey and three appearances, Razak returned to Manchester City and played as a late substitute in their 0–1 League cup quarter-final victory against the gunners at the Emirates on 29 November 2011.
He later joined Charlton Athletic on a three month loan deal and later returned to Manchester City in October 2012.