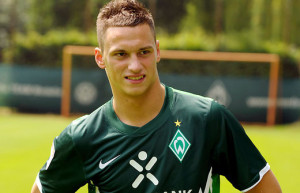 Stoke City have sign Austrian forward for an undisclosed fee from German side Werder Bremen.  Marko who joined German side Welder Bremen from FC Twente in 2010 now plays the English Premier League for his first time in his football carrier.
Stoke are reportedly paying £2m for the forward, who has won 27 international caps for Austria. His signature follows the arrivals of defenders Muniesta from Barcelona, Assaidi from Liverpool and Pieters from PSV Eindoven.