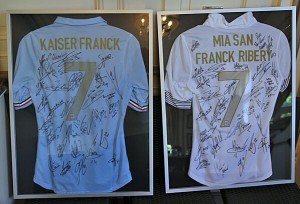 Franck Ribery voted “Best European Player” of the season was celebrated by his teammates on Tuesday Team France. The midfielder of Bayern Munich author of the treble Cup-League-Champion’s league and who won the European Super Cup on Friday received gifts from his countrymen.

Ribery therefore can ogle the “Golden Ball” in January.