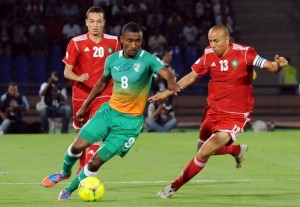 The Elephants of Cote d’Ivoire clash on September 8 in Abidjan the Atlas Lions of Morocco in the final day of World Cup 2014 playoffs. The two teams face many absences. Monday in a rush, Sabri Lamouchi had to recall Koffi Romaric to compensate the package on injury of Jean-Jacques Gosso Gosso.

The Franco-Tunisian coach Elephants also called Abdul Karim Cisse,  the goalkeeper of Africa Sports to replace Sangare Badra Ali being tested in the USA. The striker Mathis Bolly of Dusseldorf is also injured and unavailable but Lamouchi did not want to replace him.

Two packages in the Lions

FRMF (Royal Moroccan Football Federation) via a statement on its website also said that Zakaria Ahmed and Bergdich Kantari who contracted injuries will be absent for the meeting. They were replaced by Mohamed Berrabeh (Wydad Casa) and Abdelilah Hafidi (Raja Casa).

The men of Rachid Taoussi will fly on Wednesday to Abidjan. The game has no issue. Morocco is already eliminated while Côte d’Ivoire composted its ticket during the previous day.