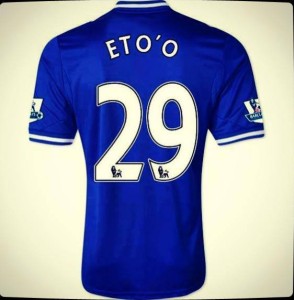 The arrival of Samuel Eto’o is far from being good for Demba Ba in Chelsea. The Senegalese striker is found in a great competition with the Cameroonian among the Blues. He would also have left this summer to find playing time but Jose Mourinho has finally decided to keep him.

Integrated to the list of players who will compete in the Champions League this season as his new teammate, Demba Ba will not have the opportunity to wear his number 29 obtained upon signature among the Blues in January.

The number has been assigned to Samuel Eto’o, the Londoner club said on Thursday. Demba Ba then retrieves the number 19 vacated by the Portuguese Paulo Ferreira at end of contract. The number 19 is also the same number that wore the Lion of Teranga in Newcastle.