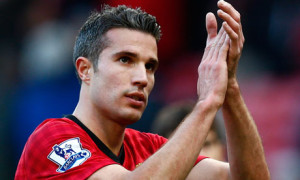 Manchester United striker Robin van Persie rejects talk that he is unhappy with David Moyes’s coaching methods at Old Trafford, according to Dutch newspaper De Telegraaf. Recent rumours suggested Van Persie had not been impressed by Moyes’s reign so far after replacing Sir Alex Ferguson at the helm of the Premier League champions.
The report said that former Everton boss Moyes now has his work cut out to convince Van Persie he is the right man for the United hotseat. Despite starting the season brightly, with two goals in  United’s first two games, the 30-year-old appeared out of sorts in the goalless draw with Chelsea and 1-0 defeat at Liverpool, the report added.
Van Persie cut a frustrated figure at Anfield on Sunday and looked close to losing his cool several times, the report further said. A friend of Van Persie said that the player was not happy and therefore, he could not hide it on the pitch, adding that when he became frustrated, he was capable of doing something silly. The dutch man has come out clear that “It’s great working with the new manager David Moyes,” Van Persie is quoted as saying. “He has his own style and methods and I like this.”