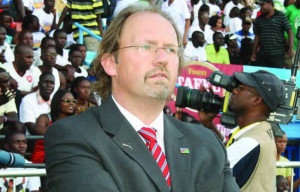 Malawi coach, Tom Saintfiet,strongly believe the  penalty given against them in the first half affected their game plan, the admitted that Emmanuel Emenike’s goal in the dying minute of the first half was a killer.
“We played a very good first half; we played according to plan. Nigeria had good ball possession in the first half but my goalkeeper was not threatened. It was 30 seconds after the first 45 minutes that we conceded the goal, and I blame my left-back for that error which gave Emenike the chance to score,” Saintfiet said.
“The goal affected our game plan because we wanted to start the second half goalless so that Nigeria would be under pressure and it would allow us to play our tactics. The second half was very difficult for us to come back because we played a very strong Nigeria side that had been energised by the first half goal.”

The Belgian added, however, that his side could have fought back if the penalty and the red card were not given. “I’m 90 per cent sure that the penalty awarded in the second half was not genuine. My player did not touch Nnamdi Oduamadi but the referee decided to give it anyway. But for the red card, if I was referee, I would have given a red card,” he said.’ Saintfiet was however quick to congratulate the Super Eagles. “They are a very good team, and I want to congratulate the, and wish them well and I hope we see them at the World Cup.”
Nigeria scored malawi 2-0 to advance to the next round of the world cup qualifier.