The women’s basketball team of Gyor was involved in a serious road accident on Saturday in Hungary. Peter Tapodi, the team manager and Fuzy Akos, the head coach have lost their lives, while 16 passengers suffered injuries of varying severity.

The accident was caused by another car that had crashed into the bus carrying the team Gyor. Wanting to avoid it, the bus driver derailed, causing the fall of the bus.

Natasa Kovacevic one of the players has been amputated to the knee. 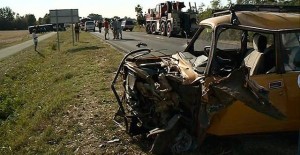