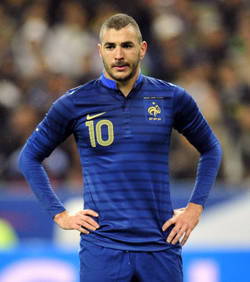 Striker Karim Benzema’s failure to score in his last 15 France matches has seriously diminished his team’s hopes of qualifying directly for next year’s World Cup finals.
The Real Madrid forward, who has gone over 20 hours without finding the back of the net with Les Bleus, produced yet another abysmal performance as France drew 0-0 with Georgia in their qualifying Group I in Tbilisi on Friday. The result left them second on 11 points with two games remaining, three points behind group leaders Spain who beat Finland 2-0 on Friday and on course for an unwanted place in the play-offs.
Benzema had one chance in his 62-minute appearance, which he blew with a weak shot at keeper Giorgi Loria. “Sometimes we do good things, there are nice moves but at the end of the day we do not score. We must continue to work and hope it will work for the next game,” Benzema was quoted as saying yesterday.