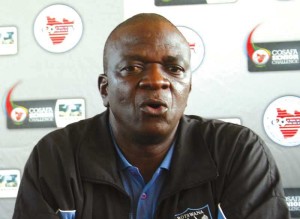 Botswana coach Stanley Tshosane admittedly said his players gave the Bafana Bafana bonus goals after his side were thrashed by 4-1 in the 2014 World cup qualify. Both sides had nothing to loose or win because they both had no chance to advance to the next of the 2014 World cup even though there was  nothing at stake, the south Africans looked more determined to end their campaign positively.
Kaizer Chiefs forward Bernard Parker bagged a late brace after first-half efforts from Kermit Erasmus and Dean Furman, while ex-Santos striker Jerome Ramatlhakwane netted for the Zebras at Durban’s Moses Mabhida Stadium. Tshosane said afterwards: “Ja, we expected this. We had a very good plan. We managed to contain them until about 20 or 30 minutes. Today I think South Africa were very lucky. The goals were a bonus from my players. I don’t know what went wrong, but we will try and work on it.”
Tshosane’s men ended third in Group A with seven points – six points adrift of winners Ethiopia, four behind Bafana, and four ahead of bottom-placed Central African Republic.