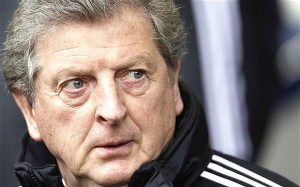 The World cup qualify match  between England and Ukaraine will be a tough test for England manager Roy Hodgson as he goes in without his top strikers. Hodgson had every right to bemoan his and England’s luck after the comfortable 4-0 win against Moldova  at Wembley on Friday.
Having already lost Daniel Sturridge, displaying the form of his life at Liverpool, to a thigh injury, Wayne Rooney to an accidental kick in the head in training and later lost Danny Welbeck to suspension after receiving two yellow cards in the game against Moldova,the chances of the English team to win the game against Ukraine would be reduced due to suspension and injury situation in their camp.
A victory for England  will be a cause for elation, with Hodgson’s men currently a point ahead of Ukraine at the top of the group and that could  see them through to the next stage of the world cup qualify.
Hogson must win this game to prove to the new FA chairman Greg, that England is capable of qualifying to the World cup and can win it too.
Greg who raised eye-brows that England cannot win the 2014 World cup is yet to be proved wrong.
England will play Ukariane in Kiev on tuesday.