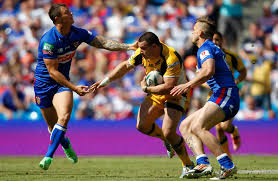 Coach of Wakefield Richard Agar has expressed his delight after the Wildcats stole the two points in a high-quality local derby with Castleford , but he admitted his side will have to sell more players to balance their books. Trinity jumped above the Tigers to finish in eleventh spot in Super League after a free-flowing game that momentarily allowed Wildcats’ fans to forget about their financial difficulties, after new chairman Michael Carter revealed last week the club need to raise £400,000.
“Liam Kay took his tries exceptionally well. During the course of the game I thought we were the team who were consistently making line breaks,” said Agar. “I pay tribute to Ali [Lauitiiti], he came up with a few quality pieces of play and he came up with the kick block on (Rangi) Chase which set up the last-minute try. We can have an off-season of bragging rights.
“We have had a really tough week. We will try and keep a hold of the core group of players. The club has got some important bills and situations over the next two months. Richard said.
At the end of the crucial encounter,  Wakefield made 36 scores as against Castleford 32 score.