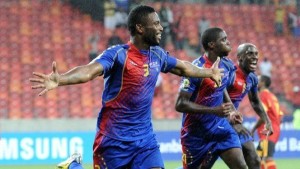 Cape Verde shockingly made a historic victory by scoring North African giants 2-0 to progress to the next stage of the 2014 world cup qualify at the Stade Olympique de Rades. The Blue Sharks went into the clash trailing the Carthage Eagles by two points and needing away win from home to edge closer to reaching their first World Cup.
The visitors announced their presence when they opened the scoring in the 28th minute of the first half courtsey AC Omonia winger Platini. The Blue Sharks looked more poised to qualify to their maiden World cup as they played the Tunisians  boot for boot. Things went from bad to worse for the Tunisians  three minutes before the break when Heldon Ramos doubled the lead.
The Stade Olympique de Rades went dead as the Blue Sharks tormented the Tunisians.