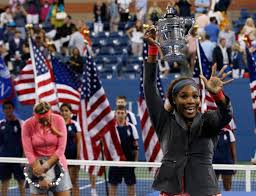 Serena Williams retains her title at Flushing Meadows, a first since Kim Clijsters in 2010. The American got a little more in tennis history by winning a fifth title at the US Open on Sunday. Facing Victoria Azarenka in the final, her runner up in the world ranking, Serena obtruded in three sets, 7/5, 6/7 [6-8], 6/1 after 2 hours 45 minutes of play

At 31 years and 348 days, she became the oldest player to win at Flushing Meadows. With five titles under her belt, the World No. 1 equals the record of Roger Federer at the US Open and note down her name for the 17th time in a Grand Slam trophy, as far as the Swiss. Also winner of Roland Garros this season, Serena Williams is just one unit from the 18 coronations of Chris Evert and Martina Navratilova. But she is still far from the 22 titles of the German Steffi Graf and the absolute record of the Australian Margaret Smith Court (24 titles). Serena Williams is in her 55th trophy gleaned on the WTA circuit.