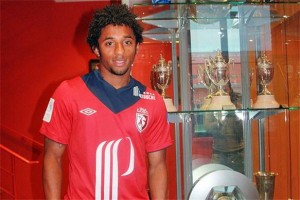 Under treatment throughout the second phase of the 2012-2013 season due to an ankle injury, Ryan Mendes is back on the pitch during the friendly match against Troyes, before his first official match in the previous day of League 1. “I spent six months without playing because of my injury. It was very long, but I have never doubted because I worked with competent LOSC people to get back on my feet. I knew I would return. I worked hard for it, “said the Lille striker on the club website.

“Today, he says, I do not feel any pain. I’m starting to find playing time and progress physically”, says the Cape Verdean has also taken the tunic of the Blue Sharks, since their brilliant Afcon 2013 last weekend. “Before leaving for selection, I played 70 minutes against Rennes (0-0) and I participated in the entire match with Cape Verde”