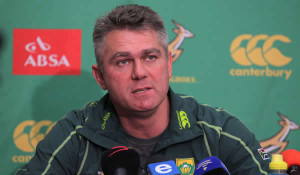 After an impressive 38-12 victory over Australia last weekend, coach Heyneke Meyer has named an unchanged 23-man squad for Saturday’s Rugby Championship showdown between the Springboks and the All Blacks. “We’re very fortunate to have a touring squad of 28 fit players to choose from, but following the performance last weekend against Australia, it made sense not to make any changes,” Meyer said in Auckland on Wednesday.
“Continuity in selection has been something we wanted to address this year and I’m very happy that we’ve not been forced into making too many changes yet. The 23 who played against Australia deserved another chance this week as we believe in rewarding good form“. After beating Australia for the first time at Suncorp Stadium last weekend, the Springboks travelled to New Zealand where they will face the tough task of securing their first away victory over the All Blacks since 2009.
Coach Heyneke believe Playing the All Blacks in New Zealand is the ultimate challenge in rugby and one they are  very excited about facing them. The Springboks are only halfway through to the Castle Lager Rugby championship as they have three tough games ahead. They will face the world’s best Rugby team All Blacks this weekend.