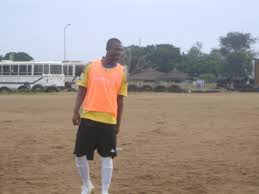 Amidaus newly promoted player Francis Afotey will make a quick return from injury to help his club in this year’s league.
Amidaus Professionals begin their league campaign this weekend with Bechem United  but attacker Francis Afotey Mensah, who joined the senior side this season has been sidelined since suffering a hand injury in their pre-season game and he is nearing a return in the new season but he will be missing the first three league games in their opener. The team is currently in  Bechem preparing for their first premier game against Bechem United but without the prolific attacker.
Francis Afotey Mensah’s return will be a boost to the Amidaus squad. Afotey is eyeing a commending start in Amidaus and a local black stars in the near future. Africatopsports.com will updates you on the prolific midfielder’s return.