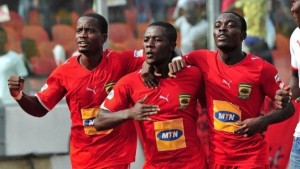 The wait is over as the 2013-14 Ghana Premier League season gets underway this today after a busy off-season dominated by player recruitments and restructuring by Clubs.

Eight matches are on the fixture list today, the opening day of the league.

Didi Dramani, contrary to speculation that he was on his way out of Asante Kotoko after guiding them to the tile in his top-flight debut will remain for a second season in charge as coach of the Porcupine Warriors.

The champions will get the season started against Aduana Stars at the Coronation Park as they serve the final of a three-match home ban from the previous campaign.

Hearts of Oak will begin the campaign with a visit to the Gyamfi Park where they play New Edubiase as David Duncan aims to bridge the gap between the Phobians and their rivals, Kotoko.

But without the quality of Mahatma Otoo, who top-scored the league last season and pushed Hearts up the log, the pressure will be on Duncan to produce a new scoring machine.

There are lots of expectation in the camp of AshantiGold who continue to push for their fourth premiership title. They travel to Kpando to test the might of Heart of Lions. The pressure will be on Bashir Hayford to deliver the Miners silverware but the home side, Lions, after beating the drop last season will be eager to kick off well.

Hasaacas’ opening contest at the Essipon Stadium will be against Medeama who will have a new man at the helm, Hans Van der Plyum. It is the Dutchman’s fourth premiership job after stints with AshantiGold, Heart of Lions and Berekum Chelsea.

Bechem welcome Amidaus Professionals to the Bechem Park. Inter Allies start off at home in Tema against Ebusua Dwarfs.

The Golden City Park will not be missing premiership football following Berekum Arsenal’s demotion, city-rivals, Chelsea will still be force to reckon with as they kick off at home against King Faisal.

Liberty Professionals will take on Wa AllStars at the Accra Sports Stadium to wrap up the opening day fixtures of what promises to be an exciting season.