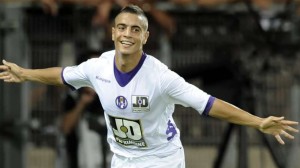 Goals galore of Africans this weekend in the five major European leagues. Our weekly review is back to make you a complete overview of the performance of African internationals in Europe. Special mention to Mounir El Hamdaoui , author of a hat-trick in Lige and Pierre- Emerick Aubameyang who sends heavy in the Bundesliga.

Just like last season, Wissan Ben Yedder lags behind his statistics. But the Tunisian striker gradually begins to get into the path. It was he who opened the scoring for Toulouse on Saturday and caused problems to Marseille (1-1 ), which restored parity only 5 minutes to the end.

Guingamp will regret its 1-1 draw against Bastia. Led early in the second period with a goal by the Tunisian Wahbi Khazri , the Britons returned to the brand in the 88th by Mustapha Yatabaré . But the Malian miss the opportunity to get the three points for his team missing a penalty in the stoppage time

A first goal in the league but without success. Junior Tallo probably will not forget his debut in the championship of France. The Ivorian striker has reduced late in the game the score for Ajaccio against Evian TG (2-3). Earlier, his compatriot Brice Dja Djedje scored for the Upper Savoy.

Mounir El Hamdaoui knows how to put his new supporters in the pocket. Loaned to Malaga this summer, the Moroccan has been strong this weekend . A triple for the 5-0 victory over Rayo Vallecano . He also made an assist to Eliseu.

New darling of the German public, Pierre- Emerick Aubameyang confirms his qualities every weekend. Newly tenured with Borussia Dortmund, the Gabonese scored a nice double against Hamburg at the overwhelming 6-2 victory over the Marsupials. Aubameyang is the current top scorer in the Bundesliga with five goals in five games. 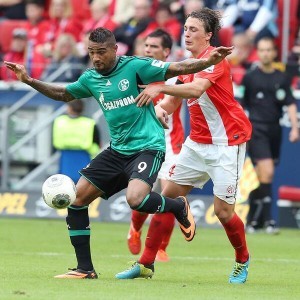 Schalke 04 can say thank you to Kevin Prince Boateng. The Ghanaian midfielder finds difficulties to get imposed in his club. On his second match, he scored a goal and allows his team to a 1-0 win over Mainz.

Nuremberg and Brunswick are neutralized 1-1. The promoted equalized through Omar El Abdellaoui, the Norwegian striker of Moroccan origin.

This was the big attraction this weekend in the Premier League. The beginnings of Samuel Eto’o. But the Cameroonian has not scored or won with his team. Chelsea lost against Everton 0-1 .

Also debut for the Algerian Adlène Guedioura with Crystal Palace and same fate. 0-2 defeat against Manchester United. In this meeting, the promoted played shorthanded after the expulsion of the South African Dikgacoi.