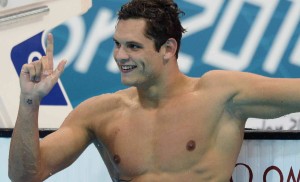 The pool is not his concern for the moment. And because Florent Manaudou has not finished digesting his defeat on 50 meters during the last Barcelona World Swimming championships. The little brother of Laure Manaudou will find the training in early October after an exhibition of 50 meters back in Rio, Brazil. However, he has come back strong to permanently erase from his memory this setback that still haunts him.

“That sucks; I waisted a year for nothing. The failure of the 50m was hard to take hot because I knew I was stronger in the Olympics and I should do better than that”, he blames himself in an interview with our colleagues from L’Equipe.

He added: “It’s close to my heart for me to prove it to myself and to others, it is not important. I have confidence in myself; I know I’ll bounce back. I will not say that I will be champion of Europe at the end of this year because there are still big customers. But I want to win”.