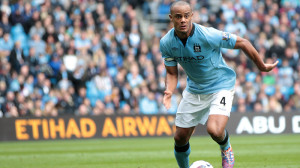 Manchester City skipper Vincent Kompany is set to make an earlier than expected to return to action – and could play in the opening Champions League group game against Viktoria Plzen.Vincent Kompany played a full active role in training for Manchester City last night. The Belgian has been out injured since leaving the field with 20 mins to go during the opening game of the season against Newcastle.

“Kompany led the team on their warm-up run around the pitch, went through a series of stretching exercises and played in a practice game across the pitch“, Manager Manuel Pellegrini said yesterday that Kompany would only take part in the game if he is 100% fit.
It could be an important week for Kompany to make his comeback with the Derby against Manchester United to come on Sunday.