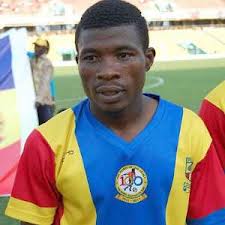 Battle of words between captains ahead of the big clash in Glo Premier league next sunday. After Porcupines skipper Michael Akuffo claims his side will win the game, Hearts Of oak captain Abubakar Moro doubt wether Hearts will win their game against Kotoko or loose. Speaking on happy FM,the player found it difficult to predict a win for his side when asked wether they will win or not. “Football is a win, draw, or loose game so i cannot say we will win or not but we will put in our best” Moro said.
Some expected Moro to boldly say they are ready and will score the porcupine warriors but Moro held his comment waiting for judgement day at the Accra Sports Stadium come sunday 22nd September. He added that  football is not about what you say but its about what you do on the pitch so pleaded to all hearts supporters to troop to the Accra Sports Stadium to support the team.